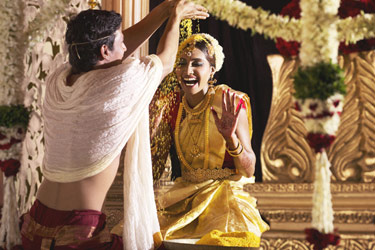 In India, marriage is not just a union of two people. It is the union of two families. Marriage is the strongest social bond that takes place between a man and a woman. In a South Indian marriage, it is viewed as a lifelong commitment of husband and wife to each other. Hindu marriages differ from each region, with their own cultural customs. Exchange of garlands, tying the mangalsutra and going around the holy fire are some of the customs which are common to all marriages.

The marriage could be either arranged marriage or love marriage. In arranged marriage, the boy and girl meet each other through a medium which is usually parents or matrimonial agency. In love marriages of a South Indian marriage, the process itself begins only with good understanding between the boy and the girl and only depends on parents’ consent and acceptance. But this does not happen that easily, though trend is changing fast. The disadvantage in this type of South Indian marriage is that the couples are less supported by the parents in their married life as the initial decision and responsibility rested with the couples themselves.