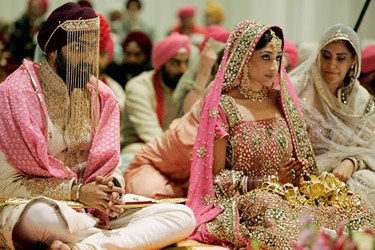 Punjabi and Sikh weddings are depicted by their chirpy celebrations that are a reflection of their exuberance towards life in general. They are solemnized late in the night and involve all nightlong dancing- an aspect that is now increasingly been incorporated in the weddings of other communities as well. These type of weddings are real source of delight for everyone. The different types of Punjabi/Sikh marriage rituals include Roka, Mehendi, Milni and Varmala/ Jaimala.

The Punjabi as well as Sikh wedding ceremony generally takes place late in the evening, after dinner. As the auspicious time for the marriage comes near, a puja is performed for the groom by the priest. Then as the bride is escorted to the wedding mandap, the priest performs another puja with the couple and their respective parents.

This is followed by the kanyadan ceremony where the father gives away his daughter to the groom. Next ritual is the pheras where the couple encircles the ceremonial fire seven times. This concludes the marriage ceremony after which couple receives blessings from all their elders.