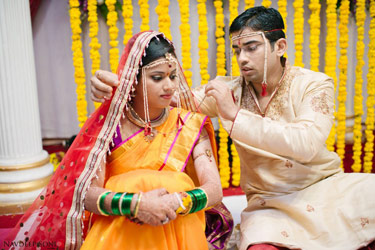 Maharashtrian marriage is perhaps the simplest and the least luxurious in the whole country. Unlike other weddings, most of the rituals are preformed early in the morning. The marriage procedure starts with finding a suitable counterpart. After this, the horoscope of the boy and the girl are matched by the purohits. After the horoscopes match, the mahurut for the wedding is taken out. This is followed by the preparations for the marriage, with the wedding rituals being performed along side.

Sakhar Puda ceremony is the initial ritual which takes place in any Maharashtrian wedding. It can be termed as the engagement, wherein the bride is given a sari, and sweet or sugar, by the groom's family. Next is the Kelvan ceremony, which is performed at both the bride's and the groom's house followed by Haldi ceremony.

After wedding, Grihapravesh is the first ritual conducted and the groom's mother welcomes the new couple and washes their feet with milk and water. The couple enters the house with their right foot. Last but not the least reception party is organized, wherein sumptuous food is served to the guests