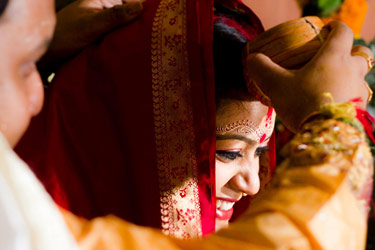 Oriya marriage happens primarily in the Orissa state. The wedding ceremony and rituals bear strong resemblance with Hindi traditional marriage ceremony but are distinctive in certain aspects. The Oriya natives are simple and do not believe in showy culture.Pre-wedding rituals begins with Jayee Anukolo ceremony wherein invitation cards are distributed to near and dear ones.

When the groom arrives at the marriage venue with procession, it is called as Barajatri. Another ritual is Baadua Pani Gadhua custom, in which bride takes ceremonial bath for her special day. During the marriage, the bride and groom are taken to the mandap where kanyadaan ritual is performed. In this ritual, father of the bride gives responsibility of her daughter to the groom for life time.

Once the newlywed couple reaches the groom’s home, they are given warm hearted welcome by his family. The entering of bride in the marital home for first time is known as Grihpravesh. This is followed by the Astha Mangala custom in which the newly-wed couple visits the bride's house, on the eighth day after marriage. Here, they are given a cheerful welcome and treated with sumptuous food.